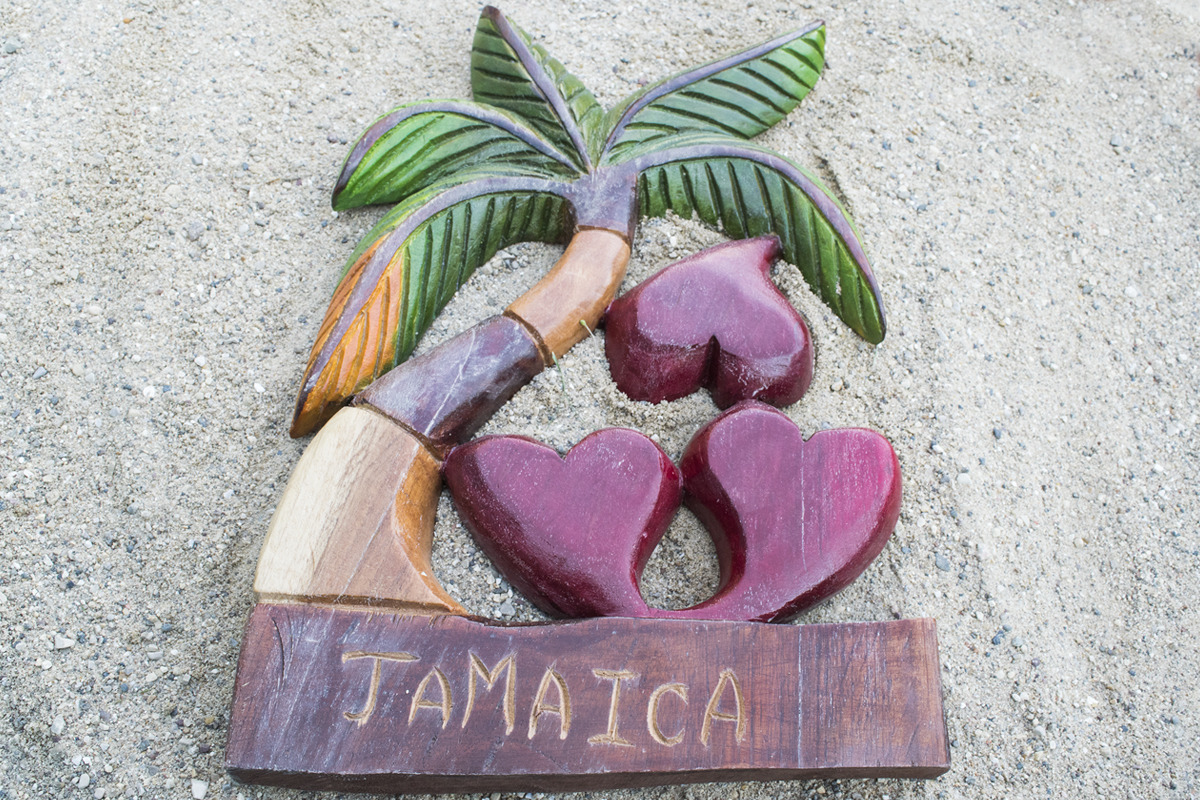 Every time I happen upon this particularly garish wood carving in some dark corner of my home, be it a closet, under a desk, or in a chest freezer, I am subjected to a multitude of conflicting emotions, including, but not limited to, love, shame, nostalgia, regret, altruism, and resentment. That sentence is fifty words long out of necessity – this trash-sculpture has tormented me for nearly two years. Also, that’s kinda my thing in this blog.

Hopefully in the next few minutes, by forcing myself to address this unsightly memento and confront my contempt, I can answer some questions for the both of us:

Why on earth did I buy this?

To set the stage: my wife and I decided to take our week-long honeymoon at an all-inclusive resort on the wonderful island nation of Jamaica. For me it was a much needed seven days repete with the absence of commitment, consumption of otherworldly foods, and the – sometimes irresponsibly – guzzling of varied drinks.

Everything about our vacation was exactly as we had hoped and envisioned. The only dour note to sour our enjoyment was that you couldn’t sit anywhere within 50 feet of the water’s edge without being regularly hassled to buy bracelets or pestered to go parasailing from the local traders and business-minded folk. Being that I have a difficult time saying ‘No’ to people, I was an ideally susceptible target.

On day four or five, when the ceaseless pitches were getting a bit tiresome, my wife and I were approached by a silver-tongued gentleman with a few garbage bags full of assorted wares which he immediately began pulling tout of his bags and laying on the beach before us. The man began recounting the hardships he endured in carving these items with his own hands – showing us his bandaged fingers for effect. One of the guards at the resort approached, something I noticed they did to be sure guests weren’t being harassed too strongly, and I felt a tinge of defensiveness for the man just trying to make a modest, and seemingly honest, living.  Much to my wife’s disapproval, I took pity and caved, buying the nearest novelty that wasn’t too inconsequential to make it seem as if I just wanted to send him on his way. In my defense I didn’t have much better to chose from.

The next day there was a market-style event on the resort and one of the stands had about forty of these on display. I paid $60 for this piece of garbage that we quickly decided would be pawned off onto one of our sets of unsuspecting parents. The man would not be seen again for the remainder of our stay.

Why did I imagine it was acceptable to allow this into my home?

Being that it was our honeymoon, we didn’t feel particularly obligated to put much effort into acquiring souvenirs for everyone back home. When we finally did return, our only souvenir was this solitary repulsive knickknack (aside from another we wouldn’t receive for nine months time).

Giving it to one set of parents wouldn’t be fair to the others and, frankly, it wouldn’t be really be fair to the recipients. It’s like those uncomfortable instances when someone bestows upon you an undesirable endowment: you couldn’t possibly refuse it and risk looking like an ass and you have difficulty bringing yourself to return or re-gift it because you think, in keeping it, you’re demonstrating how gracious and appreciative a person you would like to be. In truth, they probably put less thought into the act of gifting you guilt incarnate than you do as you try to uncover some non-existent redeeming quality in the uninvited burden. If someone gave this to me I would wonder what I did to piss them off before using it to level one of the workbenches in my garage.

Does your wife still love you?

Last I checked, it seemed so though I feel the sideways glances may hint at some two-years-held animosity.

Do you know you could just burn it?

It’s made of wood so of course I could burn it. I have considered it many times and I foresee a time when such an event will come to pass.

Ultimately the problem lies in that I paid $60 for it, I don’t hate any of my family members or friends enough to subject them to everlasting ownership of this tacky trinket, and if I throw it away that beach peddling charlatan tallies another victory against me. The day will come when I will have to confront this allegedly hand-crafted bad decision. Until that time it will remain stashed away under an unoccupied desk in my home, forever tormenting me with reminders of my weak resolve and gullibility.